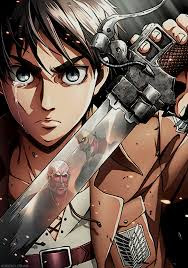 Are you the food?
No, we are the hunters!

No matter how much you pray, nothing will change
What changes this moment is the determination to fight

Pigs that sneer at the resolve to climb over corpses and advance
Have peace as livestock, live in false prosperity, and be as free as starved wolves!

The humiliation of captivity is the beginning of the counterattack. Beyond the walls, the prey is slain by Jäger
His body burned by an overflowing urge to kill, he will pierce the twilight with scarlet


With the crimson bow and arrow!

Foolish indecisiveness, nothing more than an illusion, what even now maybe reckless bravery...
The pawn of liberty...the charge of the assault
Victory to the slave that runs!

The absurdity in life is the beginning of the onslaught
The stolen lands, the world itself as Eren desires,
As unstoppable rage penetrates him, to the dusk he brings violet skies

The bow and arrow of Hell